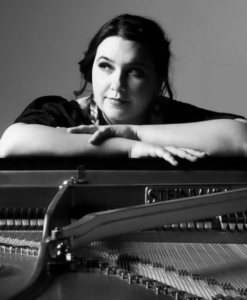 Stephanie Joy Zickau is an active performer and composer, performing on piano, cello, and harp. Most recently she has been commissioned by the University of North Texas’ school of dance for a new work in 2018. She was invited to compete in the Seattle Bushell Concerto Competition in 2022, and has recently performed with the Whitworth Symphony Orchestra and the Coeur d’Alene Symphony Orchestra. She serves as the Executive Director and staff composer of 208 ensemble, a contemporary chamber ensemble specializing in performing and commissioning works by live composers.

After making her solo debut at the age of seven with the Eagle Symphony Orchestra performing Mozart’s Piano Concerto No. 23, Stephanie has won numerous awards throughout her career, including “Best Idaho Pianist” and “Most Creative Pianist” at the International Festival for Creative Pianists. She studied under Dr. Del Parkinson -who is currently another faculty member here at Red Lodge Music Festival- before and during her collegiate career at Boise State University. She has performed with multiple symphony orchestras, and also won the Music Teacher’s National Association competition twice. She was commissioned twice to perform for the “Stars of Steinway” concert series with performers such as Yoonie Han, Dr. Theresa Bogart, and Dr. Mark Hansen. She currently maintains a private piano studio in Spokane, Washington, and actively performs in both solo and ensemble events in the Inland Northwest.