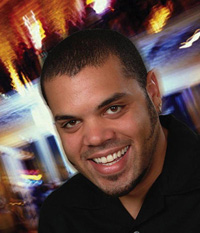 Appearing and performing as “Ryan Montana,” a singer-songwriter, jazz saxophonist, recording artist, internationally touring musician, teacher, producer and studio engineer, Ryan was born and raised in the beautiful Rocky Mountains of Bozeman and has been living and recording in Southern California for the last 11 years. Through journeys with industry stars, and studies with music legends, Ryan has developed as a contemporary indie artist belonging to the growing community of studied, genre melding, multi-faceted performers that are taking music back to its collective roots while exploring and researching the art form of Jazz and its connection to the cultural history and sociological condition of America. As one of the last remaining members of the iconic rock group Ike Turner and The Kings of Rhythm, he was on the Grammy Award winning 2007 album, Risin’ With the Blues. He was awarded with “Jazz Artist of the Year” honors in the 2004 Los Angeles Music Awards. His latest studio time and production work has been with the acclaimed singer-songwriter Earl Thomas which recorded and broadcast a live show from London on BBC radio, and with a new artist collective called “JAAMA,” which features Senegalese artists and the likes of Tanmoy Bose’Pandit Ravi Shankar’s Tabla player; and Paul Smith who toured and recorded with Natalie Cole and Bill Withers. Ryan is currently pursuing and continuing his performing, teaching and recording career while researching and studying jazz saxophone and African-American history and developing a series of saxophone method books at Montana State University.