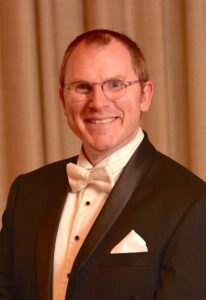 Peter Haberman serves as the director of bands and professor of music at Concordia College where he conducts The Concordia Band. He also leads the Echo Band, works with student conductors, teaches music education courses, and coordinates the comprehensive band program. Prior to his appointment at Concordia, Haberman held similar positions as director of bands at the University of Wisconsin-Eau Claire and Bucknell University.

Haberman maintains an active schedule as a conductor, guest conductor, and clinician, having worked in more than 10 states and on five continents. His ensembles have performed at both national and international conferences and music festivals. He also has served as music director for many community ensembles including the Chippewa Valley Youth Symphony.