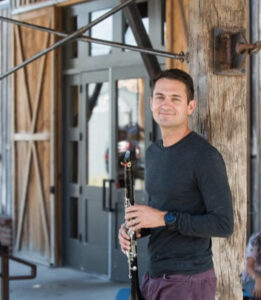 David Carter is Principal Clarinetist of the Tulsa Symphony Orchestra and the Tulsa Opera Orchestra. He is also Instructor of clarinet, saxophone, and music history at the University of Tulsa. He performs and records as a founding member of Duo Avanzando and serves each summer on the artist faculty of the Red Lodge Music Festival in Red Lodge, Montana. Carter has performed in the clarinet sections of many notable orchestras including the Oklahoma City Philharmonic, Belém Festival Orchestra (Brazil), Orquesta Sinfónica de la UANL (Mexico), and Detroit Symphony. He has performed and presented master classes in Brazil, China, Puerto Rico, and across the United States. Dr. Carter earned his Doctorate of Musical Arts from the University of Oklahoma as a Graduate Alumni Fellow. He also holds a Bachelor’s of Music degree from the University of North Texas, a Master’s of Music degree from The Ohio State University, and a Graduate Certificate in Orchestral Studies from Wayne State University (Detroit, Michigan). Carter is a Selmer Paris Artist and performs on Privilege clarinets. He lives in Tulsa, Oklahoma with his wife, clarinetist Dr. Angela Carter, their two children Adella and Simon, and a black Labrador retriever named Gus.